Are you a cord-cutter currently looking for the best possible Internet you can find? Or have you been curious about AT&T Internet Only Plans and wondering if it will give you the best bang for your buck? If this sounds just about right, then this is an article you have to read.

Here, we will review AT&T Internet only plans from various possible aspects. By the end, you should be able to decide whether one of AT&T’s offered plan is good enough for you.

Let us begin with some basics and a bit of a history lesson.

AT&T, as we all know, has been one of the biggest telecommunications service providers in the US for more than three decades. Chances are, even if you’ve never used AT&T services before, at least one of your family members has.

Nowadays, AT&T is no longer only powering your landline and mobile phones, but also a popular cable TV (called AT&T TV) and ISP (Internet Service Provider).

In this guide, as the title suggests, we will mainly discuss the AT&T internet only plans. 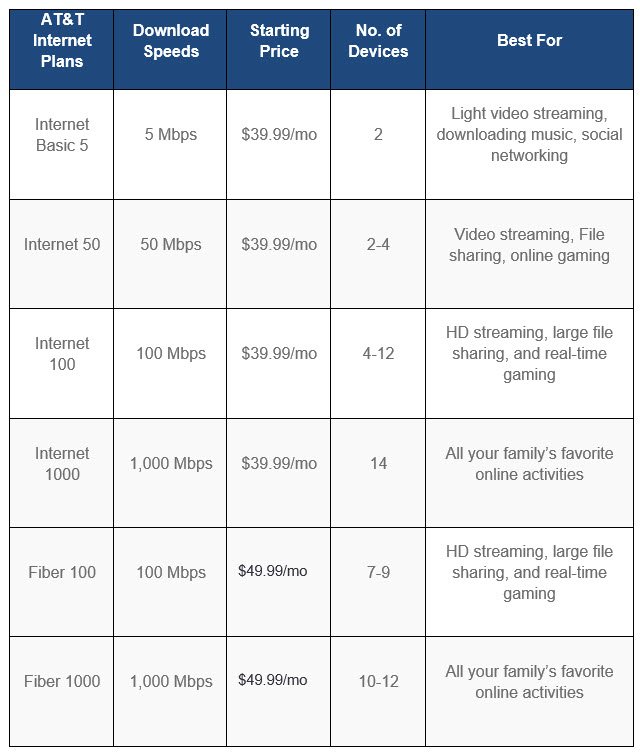 What do you get with AT&T Internet Only Plans?

With all of the offered plans, you’ll get:

So, you might be locked into a contract for the second year and will need to pay cancellation fees if you want to leave the contract early (discussed below)

Will AT&T Charge Any Hidden Fees?

Unfortunately, the answer is, yes. There are going to bee some additional fees that you’ll need to pay to get your AT&T internet-only plan installed. However, in our opinion, these fees are quite reasonable and aren’t too bad when we compare it to other internet providers. These hidden fees can include:

Most of these fees are only charged once, so in general, expect your first month’s bill to be larger than the monthly rate you’ll pay on the next months. Of course, you’d still need to pay taxes on top of any plans of your choosing. The specific tax rate will ultimately depend on which state you live in.

How Fast Is AT&T Internet? Performance and Speed Review

DSL stands for Digital Subscriber Line, and the main characteristic of this type is that internet data is transmitted to subscribers via telephone lines. It is, however, important to note that unlike dial-up internet, you can still make phone calls while connected to the internet over DSL.

AT&T offers DSL plans from 768Kbps to 6Mbps, so it’s not very fast. And, DSL from AT&T is only available in select areas.

Sufficient for basic browsing, email, and light internet use, but not recommended for heavy activities like playing online games or HD video streaming.

In short, the most affordable, but the slowest option, and not available in all locations.

What exactly is AT&T Internet? DSL? Cable? Satellite? We were also initially confused about this but based on our research, AT&T combines multiple technologies to allow high-speed internet transmissions.

AT&T Internet, at the very least, includes IPDSL (Internet Protocol DSL), VDSL (Very-high-bitrate DSL), and FWI (Fixed Wireless Internet) to deliver stable and fast internet. As a result of this combination of technologies, AT&T internet can provide a similar service similar to cable internet (up to 1 Gbps) and can deliver both TV and internet with one line.

As the name suggests, AT&T Fiber uses fiber-optic lines instead of telephone lines to connect to the internet. The main advantage of using fiber optic is that it is much faster and stable over a long distance. The fiber optic cable transmits information by using light over flexible glass fibers.

There are now two different plans for AT&T Fiber: Fiber 100 (100 Mbps, up to 9 devices) and Fiber 1000 (1 Gbps, up to 12 devices). The Fiber plans (obviously) are $10 more expensive than the AT&T internet plans for the first year and is only available in select locations at the moment.

As we have discussed above, AT&T offers various DSL and hybrid DSL internet services from 768 Kbps to 1,000 Mbps (1Gbps). Nowadays, slower DSL is becoming increasingly more uncommon, but there are certain locations that are only limited to 768 Kbps-6Mbps DSL speeds.

If that’s the case, you are limited to basic internet-related activities like web browsing, email, and basic social media. You’d have trouble streaming Netflix or local TV shows in HD, and most likely you can’t have satisfying online gaming experience.

Also, for both DSL and AT&T Internet plans, it’s important to note that the farther you are from AT&T’s central hub, the slower your speed will be and the less stable. So, you might want to check the nearest location of the central hub before you decide on a plan.

AT&T Internet plans (10Mbps-1Gbps) is far better than the DSL Basic Plans, so if your location is covered with this plan, you should definitely choose it over the Basic DSL plan, especially because they cost the same on the first year.

All of the AT&T internet plans offer 1TB (terabyte) of monthly data allowance, which is very decent and should be enough for most households. According to AT&T’s own data calculator, it would take around 400 hours of full HD video streaming.

That’s a lot, and you’d actually struggle to spend a 1TB worth of data in a month, especially by yourself. You’d need to watch around 13 hours worth of videos per day to reach this limit.

However, you can still purchase unlimited data for $30 on top of your monthly fee.

AT&T Fiber plans are not yet available nationwide, but as of January 2020, AT&T fiber-optic network has reached over 14 million locations in the country, and we can expect to see more locations covered by the Fiber plan.

While the maximum speed is not upgraded over the regular AT&T Internet plans (100 Mbps and 1 Gbps), there are two key benefits of fiber-optic internet, as we have discussed above: symmetrical speed (download and upload speed are equal), and reliability.

That is, your speed won’t be affected no matter how far your location is from the central hub, and fiber internet is far more stable.

Also, especially the Fiber 1000 plan is actually pretty affordable compared to other similar plans on the market (on the 2nd year and above, it’s currently $69.99/month). So, if AT&T’s fiber plans are available in your location, then we’d strongly recommend them.

At the moment, AT&T is available across the following 22 states, but not all of them are covered by fiber at the moment. However, if your city is covered by AT&T, the chance of it having a fiber connection is much higher than if you settle with other broadband internet providers like Frontier or CenturyLink. 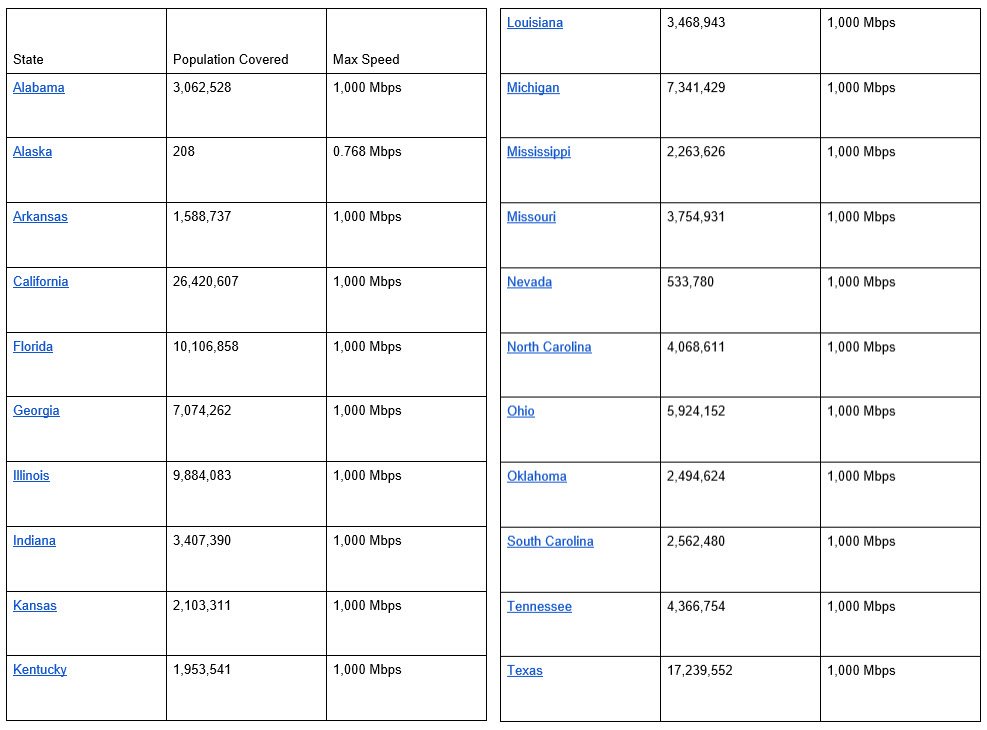 Also, here are the cities that are currently covered by AT&T Fiber:

Note: AT&T networks are always expanding so this list might not be accurate by the time you read it, refer to AT&T’s coverage map for more accurate availability.

Based on our assessment above, here are the pros and cons of picking AT&T as your ISP:

Below we’d recommend some of the best routers to use with AT&T Internet Only Plans.

Great overall features with six antennae and 9 built-in extenders, and can support the AT&T Internet 1000 plan. There is a 2.5 GHz connection that can produce up to 750 Mbps, and two 5 GHz connections that could reach 1625 Mbps for each.

A little expensive, but definitely worth the investment especially if you plan to use the AT&T Internet 1000 or AT&T fiber plans.

Well hopefully after reading this article you can make an informed decision regarding AT&T Internet Only Plans. In today’s era of streaming technologies, an Internet Only option is crucial in lowering those monthly bills. AT&T is no slouch when it comes to internet lineup of offerings. While you’re here, consider checking out some of the other articles on the site.

Here is a short-list of articles you may find interesting: