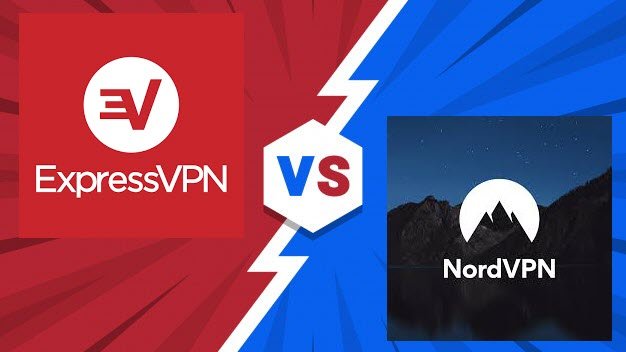 The truth is, both ExpressVPN and NordVPN are heavy weight champions when it comes to fast, reliable, and secure VPN connections. That said, our goal in this article is to answer the question “ExpressVPN vs NordVPN: Which One Is Better?”. We’ll get deeper into the comparison results below and the ultimate verdict. But before we do, it’s important to let you know about current discounts both services are offering.

Discounts for ExpressVPN and NordVPN

No matter what VPN service you end up choosing, the good news is that you can enjoy great discounts on both VPNs right now.

Discount of 49% on ExpressVPN – Without this, the normal price of ExpressVPN would be $8.32 per month under a one year contract. When you use this coupon link on their website, the price drops to $6.67, which means you’re getting 3 months free. Click the image below to claim your exclusive 30-day free trial.

Discount of 70% on NordVPN – The normal price for NordVPN is $6.99 per month with an annual plan. When you use this discount link they offer on their site as well, the price drops to $3.49 per month with a three-year plan. Click the image below to claim your exclusive 30-day free trial.

Before we get into the actual results I present the winner of our speed test: ExpressVPN ExpressVPN is going to cost you a little more than NordVPN, but it deserves it because of its speed and performance. Although NordVPN has improved its speed recently, ExpressVPN still exceeds it in almost all locations.

During several test using nearby servers in Washington and New Jersey, it showed a download speed of 90 and 95 Mbps. So, ExpressVPN basically took full advantage of my base connection speed which is 100 Mbps with no VPN. Washington Server: PING: 8, DOWNLOAD: 91.58, UPLOAD: 127.89 (source: Speedtest.net)

Another test run from a server in Switzerland, again with similar results. Download speed: 82 Mbps

Every speed test run on North American servers showed between 90 and 95 Mbps, almost the Internet base speed.

Also, ExpressVPN servers in Europe were tested and results were excellent, even considering the distance between the server locations and the user’s location (I’m in North America).

To summarize all these tests, ExpressVPN is consistently fast among all the servers tried.

NordVPN has recently improved its performance by adding new servers, but some of them are still a bit slow. For some, this can mean spending time on moving from one server to another until you find the one that gives you the speed you need.

In other words, it’s not as consistently fast as ExpressVPN turned out to be. Here’s one of the best speeds I could obtain with NordVPN, using a server in New York, showing 83.15 Mbps.

Servers in Europe were rather slow during testing. And other times, when running tests in Canada and the U.S.A., speed results were found to be quite variable. An average of 60 Mbps was reached in most instances.

Again, ExpressVPN wins this one.

During a test with NordVPN on a server in Ireland I was unable to connect. I received an error message with no clear indication what the error was. These errors could be due to problems with the server network, or errors directly within the VPN application.

ExpressVPN also behaves better in the reliability category. Their server network work just fine for all servers tested and the app very well too. Comprehensive testing with the ExpressVPN app on different operating systems didn’t identify any problems either. Overall, in both speed and reliability, ExpressVPN is the clear winner.

Decent functionalities are provided by both.

Compared to NordVPN, ExpressVPN has fewer features, but every feature offered works flawlessly. One unique feature of ExpressVPN is it’s split-tunneling feature. This allows you to redirect some applications using the VPN, while other apps go through your normal (unencrypted) Internet connection. In addition, ExpressVPN also offers some other basic functionalities:

Due to its excellent performance and the great quality of its apps for all devices, ExpressVPN currently holds the title of best VPN for Kodi and also best VPN to unlock Netflix.

NordVPN offers more features than ExpressVPN, however, some of them didn’t work very well in the during our tests. As an example, the functionality “Onion over VPN” was found to be so slow that it couldn’t even be used. However, in spite of speed and performance issues, the “Double VPN Servers” feature performed reasonably well. Some other features offered by NordVPN are:

Ad-blocking is a great function, but in general comparisons, many ads and malicious domains were found to be not blocked by NordVPN yet. If what you’re looking for is to block ads, maybe you’ll find other better alternatives.

Like ExpressVPN, NordVPN and streaming services get along very well.

NordVPN wins in the functionalities category due to the sheer number of built-in functions, although some of them didn’t work properly during our tests. That said, if split-tunneling is an important feature to you, then I would recommend going with ExpressVPN.

No security issues or “leaks” have been found while testing any of these services. One feature to note is “the kill switch” feature. The feature does not work exactly the same way in ExpressVPN as it does in NordVPN. Let’s explain.

NordVPN offers a kill switch app and firewall. However, it comes in the form of a separate app that’s been developed for Windows and iOS. This extra layer could cause an issue if your connection goes down, and it could leave your IP address exposed to third parties.

On the other hand, the kill switch developed by ExpressVPN is 100% functional, easy to set up, available in every operating system and also in some routers. ExpressVPN Network Lock is one of the most effective Kill Switches.

On their sites, we can see decent prices are being offered by both.

ExpressVPN Return Policy – ExpressVPN offers a 30-day money-back guarantee, which is the best you can find.

A good discount is being provided on their three-year term, which lowers the monthly price to $3.49. Of course, there are some risks that you assume with a long-term subscription, but the price is certainly cheaper than ExpressVPN prices.

NordVPN Return Policy – NordVPN requires users to go through their troubleshooting process before getting a return. The return of ExpressVPN instead is “no questions”, with immediate return of payment. In both cases we’re talking about a 30-day return process.

NordVPN definitely offers low prices and offers some interesting features, but its performance problems are somewhat inconvenient (unstable speed). Therefore, taking everything into consideration, I would say that ExpressVPN continues to offer a better value to their customers, even if it’s more expensive.

To summarize results for each category:

Although ExpressVPN remains ahead in many important aspects, NordVPN is for sure a strong candidate and offers great services at a cheaper price point. After all, the most accurate answer is that it depends: it will depend on what best suits you and what you’ll be using the VPN service for.

Well I hope I’ve given you a couple of things to think about and you’re better informed to make a decision on your next VPN service provider. Please come back and visit the site often, I have many articles here on AntennaJunkies.com that discuss the installation, testing, and troubleshooting of HDTV antennas, IPTV and other cord-cutting options.

If you enjoyed reading this article and want to check out some more great articles right here on AntennaJunkies.com, be sure to check out these ones below!