Fubo TV was —at its beginning— a streaming service focused solely on soccer matches and shows, but then it pivoted into a more traditional streaming service that streams live TV. Obviously this is also because of the current trends of on-demand TV streaming services that have the potential to attract even more people in the future.

Fubo TV itself has developed a fairly unique brand that differentiates itself from its competitors: a sports-first streaming service. However, it does offer various bundle plans and add-ons that can provide more flexibility for its subscribers outside the sports channels. There are, for example, add ons offering family-oriented channels and movie-focused plans.

With that being said, however, Fubo TV has continuously added their non-sports TV channels (while already offering a pretty complete set of sports channels), turning them into a very serious contender in the mainstream online TV streaming industry.

As one of the biggest TV streaming services available today, Fubo TV offers a wide range of compatibility with various streaming devices—popular and unpopular ones—. So, we get the convenience of accessing Fubo TV channels in various different ways.

However, there are also the Fubo TV app for iOS and Android if you want to stream the Fubo TV channels on your mobile devices.

Similar to other TV streaming services, Fubo TV offers various available plans that subscribers can choose from. Below, we will discuss their key features and differences.

This is the most basic and affordable Fubo TV plan is the Fubo TV Standard Plan. It includes 71 Fubo TV channels and more than 130 events, all available in up to 4K quality.

This plan also offers up to 30 hours of cloud DVR storage. It’s not much, compared to other competitors like YouTube TV that offers unlimited DVR storage, but it’s still pretty decent. You can stream from 2 separate devices simultaneously.

Below are the channels included with the Fubo TV Standard Plan. 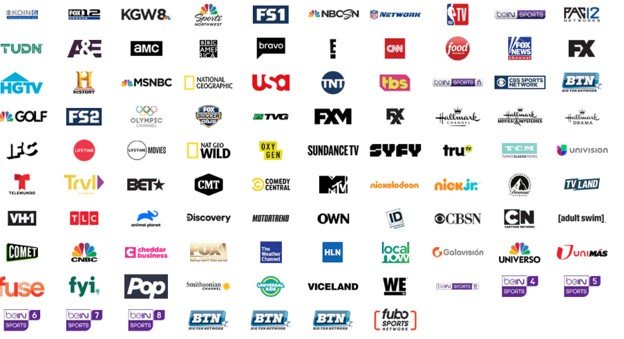 By paying an extra of $5/month, the Fubo TV Family Plan includes every feature from the Fubo TV Standard package but includes a 500-hours worth of cloud DVR storage. You also get an extra screen to access the Fubo TV channels, so you can now stream from 3 simultaneous screens instead of 2.

As the name “Ultra” suggests, this package is the highest-tier bundle plan offered by Fubo TV. The Fubo TV Ultra Bundle is essentially a combination of all the below plans:

Note: we will discuss the individual plans below.

This bundle is essentially a combination of Fubo TV Latino Plan and Family Share (more on the Fubo Latino below), offers the best of Latin TV with 31 Spanish language channels including NatGeo, Mundo, Fox Life, Fox Deportes, and more. Since it also includes the Family Share Plan, we also get the feature to stream from three simultaneous screens instead of two.

Besides the main plans and bundles, there are also individual add-ons available, some are included in the bundle plans above:

Apart from these, there are various other add-ons with more specific channel additions:

To summarize, here are the basic channels you’ll get from the Fubo TV Standard Plan:

Fubo TV, even with its Fubo Standard plan, offers a pretty attractive Fubo TV channels line up, although admittedly it’s not as generous as its closest competitors like, say, Hulu TV (see our full Hulu review here).

However, Fubo TV does offer a pretty decent set of channels line up and especially, more versatile add-on plans. You can, for example, add just another $11/month to get 20 additional sports channels—including the on-demand NFL RedZone—.  This flexibility might as well be the Fubo TV’s biggest plus point.

A (huge) downside, however, is the fact that we won’t get ESPN channels with Fubo TV, which is a shame since Fubo is, according to themselves, sports-first streaming service and ESPN is the king of sports channel for many if not most people.

However, Fubo TV does offer a really complete set of sports channels (especially with the Sports add-on and bundle plans), that will essentially cover everything broadcasted by the ESPN channels.

All You Need To Know About Fubo TV

Below, we will discuss some important features offered by Fubo TV across its different plans and add-on plans, and by the end, we will summarize the pros and cons of Fubo TV.

As an app and web app, interface is a really important factor in choosing Fubo TV among its competitors. Fubo TV offers a fairly intuitive interface that is easy to use.

First, the web app interface. Fubo TV offers a very organized interface with its web version of the app. You can easily find various categories like movies, shows, sports, recordings, and so on. Most likely anyone can navigate the interface without any significant issue.

Fubo TV offers a feature called Lookback, which allows users to watch or re-watch sports events that have been streamed in the past 72 hours. This is a pretty neat feature for sports lovers.

The Entertainment categories are also pretty organized, although it might take some time to find on-demand content from the results (especially if you don’t use a keyboard). But this is a minor downside and is pretty manageable.

The Guide interface is pretty similar to other streaming apps and cable TV guides. You can easily plan the shows you want to watch for the next five days, set up which shows to record on the included cloud DVR storage, and so on.

The mobile app interface is pretty similar to the web app. Channels are neatly categorized into sports, shows, movies, and the Guide section.

In general, Fubo TV offers a pretty good overall interface that is intuitive and easy to use.

We have briefly discussed the Fubo TV Lookback feature above, and here we will discuss it further.

As mentioned, Lookback is a pretty useful feature for those that often forget to record a program. In general, this feature lets you stream a program from the start for up to 72 hours after missing it. Although you can’t fast-forward or rewind, it’s still a valuable feature to have.

With that being said, Fubo TV offers up to 30 hours of cloud DVR storage with its most basic plan, and you can purchase an add-on for $9.99 and get a total of 500-hours of Cloud DVR.

Fubo TV, however, doesn’t offer an easy way to set up recurring recordings. So, for example, you’d need to record a weekly TV show manually each week. Last August (2019), however, Fubo TV launched the Record Series feature that solves this issue, although it’s still in beta.

Nowadays, the streaming service’s picture quality is a very important factor for many users to choose between services, especially now when we’ve been spoiled with ultra-fast internet bandwidth (that is going to be even faster with 5G in 2020).

Some of Fubo TV channels and on-demand content run in 1080p picture quality, but most of them are only available in 720p. There are, however, some shows that are available in 4K and 60FPS and even in HDR (HDR10 format).

You can check Fubo’s website that regularly updates the schedule for the following events that are going to be available in 4K/HDR here.

Fubo TV offers a seven day free trial period for those who haven’t previously signed up for the service. You do, however, need to input a valid credit and debit card.

Pros and Cons of Fubo TV

Comparison With Other Live TV Streaming

In our opinion, Fubo TV is among the best online TV streaming services available today, especially if you are a sports lover.

It’s not the most affordable (Sling TV, for example, is cheaper), but it does offer a very complete Fubo TV channels line up and is very versatile with its various add-ons and bundle plans.

With that being said, however, versatility and the ability to pick up individual add on plans are the main values of choosing Fubo TV over the others.