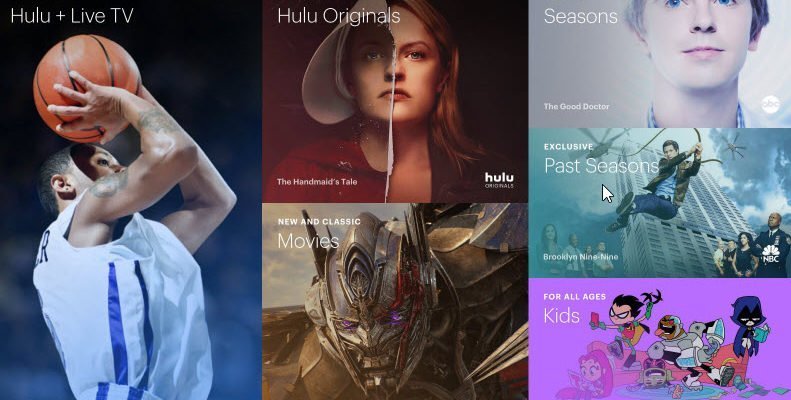 Hulu has been one of the most popular on-demand streaming services in recent years, with millions of subscribers. There are certainly several reasons for Hulu’s popularity: first, Hulu is famous for its huge library of movies and series. Second, its popular original content like The Handmaid’s Tale. Last but not least, is Hulu Live TV channels.

Hulu Live TV channels are a fairly recent feature, only introduced by Hulu in May 2017. With that being said, everyone who subscribes to Hulu Live TV plans will get access to stream a lot of live TV channels. This makes Hulu a viable option to completely replace your overpriced cable and satellite TV subscriptions.

In this guide, we will everything you need to know about the Hulu Live TV service. This includes Hulu Live TV channels, packages, pricing and a complete review. in detail, from their extensive channel lineup, to various packaging options and other aspects. However, we will also discuss Hulu as a brand and streaming service and how it fares among its competitors.

Hulu is a giant in the world of online streaming services, it offers a wide range of compatibility with various devices. This factor plays a big role in Hulu’s marketability. Hulu and Hulu Live TV channels are available on most popular streaming devices.

Hulu is compatible with several Roku models, Apple TV (4th-gen or newer), Google Chromecast, Amazon Fire TV, Android TV, and even game consoles like Nintendo Switch, Xbox One, and Xbox 360. You can use Hulu with Sony’s devices (mainly Playstation 3 and 4), but you can’t use Hulu+Live TV services for now, but this might change in the near future since Sony just killed off its Playstation Vue live TV service last October 2019.

Obviously, you can also use Hulu on your Windows/Mac computers and Android/iOS mobile devices. You can use various browsers (Chrome, Safari, Firefox, Edge/Internet Explorer) to access and stream Hulu, as well as on standalone Hulu apps for these platforms.

As mentioned above, Hulu offers various plans and add-ons for its streaming service. Users can consider various different factors and choose a suitable plan according to their needs and available budget. Hulu’s plans start from as cheap as $5.99 per month while Hulu Live TV channels services start from $54.99/month. Also, you can add additional channels and extra features which will obviously increase your plan’s monthly fee.

In this section, we will discuss all the different plans offered by Hulu, their differences, and how they might cater to your needs and budget.

Hulu’s cheapest plan at $5.99/month. Here you don’t get access to Hulu Live TV channels, but you get on-demand access to Hulu original shows, select TV shows, and movies. Here are some key factors to consider with this basic plan:

This plan is probably the reason you are here, and here you get access to everything offered by the Hulu basic plan: access to all movies and shows in Hulu’s library. Yet, you also get the ability to stream local channels and live TV channels. Here are some key highlights of the Hulu Live TV channels plan:

Hulu offers two feature add ons to both of the offered basic plans, and another package which essentially combines the two for a cheaper price, they are:

As with some live TV streaming services today, Hulu subscription also offers a Cloud DVR storage feature, which is mainly differentiated from how many hours of shows or movies can be stored.

In this case, both Hulu Basic Plan and the Hulu Live TV Plan offer standard cloud DVR service by default, with every subscriber get 50 hours worth of cloud recording storage. However, most other subscription-based live TV services also offer roughly similar cloud DVR storage sizes. Nevertheless, 50-hours worth of DVR storage is not bad at all especially considering Hulu’s relatively affordable monthly fee compared to some of its competitors.

If necessary, however, you can upgrade for $9.99/month to get a 200-hours worth of cloud DVR storage, which also offers the ability to fast-forward through the recorded advertising. This is pretty decent, but if DVR storage is your main purchase decision factor,

Another important factor to consider in any live TV streaming services is how many different devices or screens that can simultaneously access the app and stream videos.

Both Hulu and Hulu Live TV channel’s basic plans only offer the ability to stream to two different devices simultaneously. However, as with the cloud DVR storage feature, you can increase the number of devices by paying extra. In this case, you can upgrade to an unlimited number of devices with just $9.99 extra per month.

You get the option to add both unlimited simultaneous screens and enhanced cloud DVR storage for $14.99.

To summarize, below is a table showing all the different plans and addons offered by Hulu.

As we can see from the above list, we can see that the Hulu Live TV plan offers a pretty decent selection of channels. For some people, probably one of the most interesting things about the Hulu Live TV service is the inclusion of the 4 major local networks: ABC, CBS, NBC, and Fox—although their availability will depend based on your location—.

Unfortunately, there are also some relatively popular channels that are missing in this list like Viacom channels—and Hulu themselves said that they won’t add these channels in the near future—. Hulu also doesn’t offer access to entertainment channels like MTV, Comedy Central, AMC network, and others.

To summarize, Hulu Live TV channels offer a solid lineup of channels that, in our opinion, can please most users. However, there are other live TV streaming services that do offer better packages (but they won’t get access to Hulu’s library of shows and movies, including Hulu Originals).

On its own, our verdict is that Hulu Live TV channels offer is rather underwhelming compared to its competitors. However, the main factor to consider here is not the Hulu Live TV channels themselves, but whether the Hulu library (of shows and movies) can justify the absence of some popular channels and the monthly fee of the Hulu+Live TV plan.

In the past, the basic interface offered by the Hulu Live TV channels plan is very dependent on Hulu’s Guide screen (so if you read older reviews, you might see some reviewers who complained about this). However, Hulu has fixed this and has added another way to navigate the interface, which is dubbed the Live Guide. The live guide resembles the common on-screen guides offered by most cable TV services, so most users should find this familiar.

You can easily check all the different channels (and the scheduled shows) in this Live Guide interface, and browsing through what’s currently playing is very easy and intuitive. You can also filter by categories (i.e. movies, sports, or news) which further adds to the convenience. There’s also the “recent channels” tab that might be useful for those who watch the same channel(s) over and over again.

The app offers 6 different profiles, and all of these listed above will be customized according to the profile logged in. So, you don’t have to worry about, for example, your child’s recent channels interfering with yours. This will also affect your stored shows/movies in your cloud DVR storage.

For live TV, the best resolution (and cloud DVR recording) you can get at the moment is 720p (60fps) HD. It’s pretty decent, but there are some live streaming services that offer 1080p picture quality for live TV.

Nevertheless, as long as you have a decent and stable internet speed, you should get pretty decent quality in Hulu Live TV channels.

Based on our test, here are the pros and cons of Hulu Live TV plan compared to its competitors:

Comparison With Other Live TV Streaming

In our opinion, Hulu Live TV is among the most versatile selection compared to its competitors, especially when we consider the fact that Hulu also offers its own Hulu Original shows and other popular shows and movies as parts of the package.

Although It is not the most affordable compared to its competitors (as we can see from the above comparison table), in our opinion Hulu offers one of the most well-rounded packages.

When we compare Hulu Live TV channels to, for instance, Sling TV, Sling TV’s most affordable plan is $25 more affordable than Hulu TV’s plan. However, Hulu offers more channels in its selection, and Hulu is affiliated with several local channels, so it’s a better overall pick if channel selection is your main consideration factor.

With all that being said, in our opinion, Hulu Live TV offer more advantages overall compared to its competitors. It provides a channel packed, feature rich solution for cord-cutters at an affordable price.